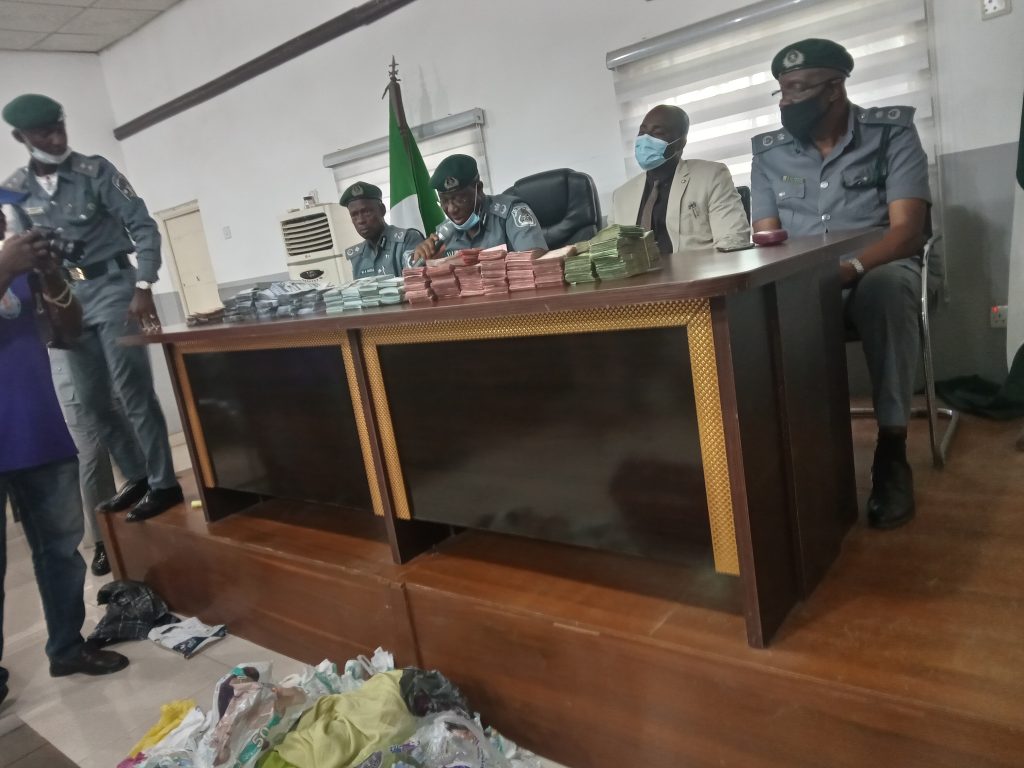 Blazonnews July 1, 2021 | 7:31 PM
Spread the love
The Kano/Jigawa Area Command of the Nigeria Custom Service (NCS) has arrested one Sabo Suleman at Malam Aminu Kano International Airport after concealing foreign currencies in baby diapers.
The Area Comptroller, Suleman Pai Umar made this known to news men on Thursday in Kano during a joint press briefing with the Economic and Financial Crime Commission (EFCC).

According to him, the Suspect who took off from Saudi Arabia came into Kano through Addis Ababa on Ethiopians Airlines and was nabbed on arrival by the men of the Customs after luck ran out of him.
Umar revealed that a sum of $184,800 dollars and 1,723,310 Saudi Riyals was concealed in a bag by the suspect after nearly arranging the Currencies in Diapers to beat security intelligence against Official Standard which states that any person traveling with money above $10,000 must declare such money with relevant authorities for clearance. 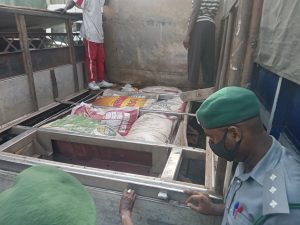 The Area Comptroller however handed over the suspect to the Zonal Head of the EFCC for further investigation and assured him of continues synergy between his Command and the Financial Crime Commission.
In a related development, Suleman revealed that the Command between the months of Jan-June generated revenue to the tune of 12,846,131,793.36 as against the N8,268,657,400.34 generated in 2020 within the same period  which shows an increase of N4,577,574,393.02 which is a 55.4% increase.
Furthermore, he said, the Kano/Jigawa Office of the Customs intercepted contraband goods with total Duty Paid Value of N27,745,540.55 within the period under review.
Items seized are; 809 bags of foreign rice (50kg) each, 413 foreign soaps, 512 cartoons of Spaghetti, 83 Jerry Can of Vegetable Oil, and 84 Packs of Couscous.
Others include 42 packs of foreign milky cream, 29 baked of secondhand clothes, 430 pieces of tramadol capsules(225mg) as well as 1,805 pieces of other hard drugs.
Suleman Pai warned that his men are readily available at all the time to apprehend anyone or group of persons who engages in the act of smuggling and other crimes against the economy and security of the country and would continue to collaborate with other sister agencies for more results.
In his remarks the Zonal Head of the EFCC in Kano, Faruk Dogon Daji Applauded the Customs in the State for the arrest made and noting that this is not the first time the command hands over suspects to the EFCC for offences related to money laundering and other financial related crimes.
Dogon Daji who was represented by his Second in Command (2IC) Michael Nzekwe said the Commission would open an investigation into the case to unravel the source of the money, what it’s intended for, those involved and lastly would prosecute the suspect and any other persons involved for violating the Money Laundry Act.
He assured the Kano/Jigawa Area Command of the Customs for more synergy between the dou and pledges their support where necessarily needed.