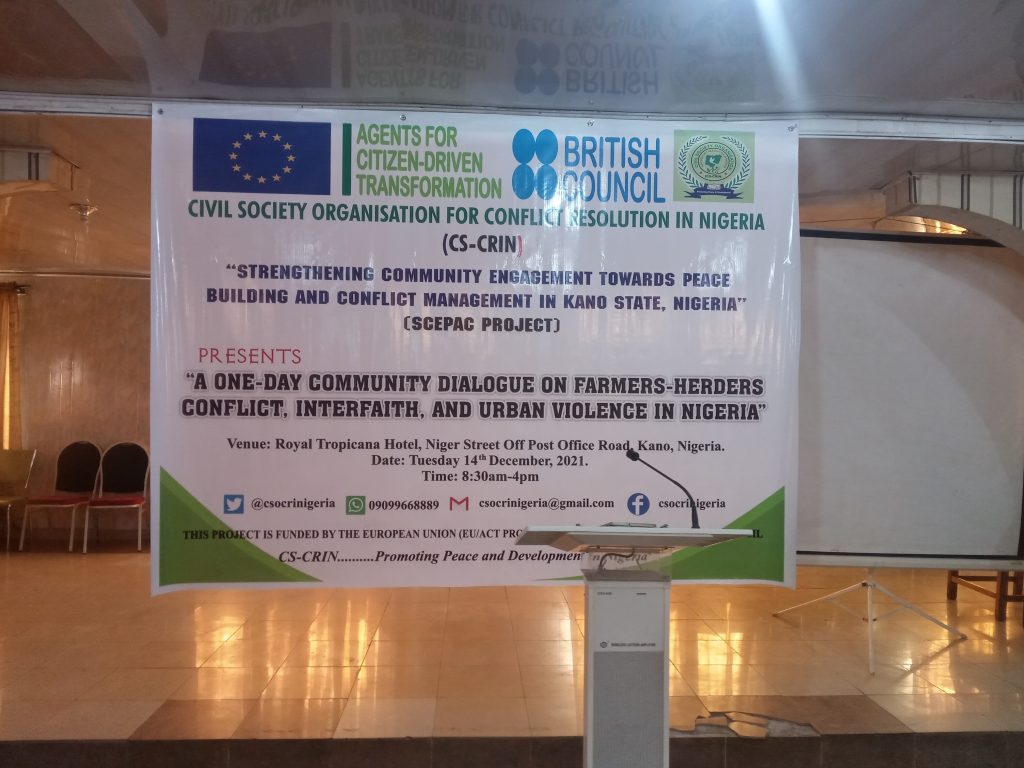 Civil Society Organization for Conflict Resolution in Nigeria (CS-CRIN) has proffered what it described ‘the common ground’ as tool to resolve various Conflicts recorded in the country such as Farmers-Herders conflicts, Interfaith and Urban violence. 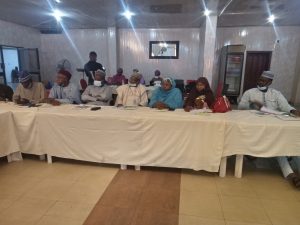 The National Coordinator of CS-CRIN, Mr. Adeniyi Aremu made this known on Tuesday in Kano during a one-day State-Wide Community Dialogue on Farmers-Herders Conflicts, Interfaith and Urban Violence in Nigeria organized by CS-CRIN and Funded by the European Union; Agents for Citizen-Driven Transformation (ACT) Programme in Nigeria Implemented by the British Council.

According to him, dwelling on things that unify the various sections, Communities, religious groups, tribes etc, in the country is will help promote understanding and peaceful coexistence. “This gathering is to bring together stakeholders in Kano State, Civil Society Organizations (CSOs), the Farmers, Herders, Religious Leaders, People Living with Disabilities (PWDs), Food Traders, Youth and Women Groups for us to dialogue on the issues that are affecting us in the society today so that we can proffer solutions that we can use as policy briefs and advocacy to our leaders”

He said research has shown in the last that factors that contribute to the Farmers-Herders clashes include some farmers attitude of harvesting their farm produce and leaving them on the farmland which the Fulani’s and the Herders while moving in the night come and devour these products while failure to harvest as at when due also causes problems between the two groups.

While speaking on Interfaith Conflicts, Aremu stated that, “This conflict result when we don’t accept that everyone of us is being created by God Almighty for different purposes and reasons; He created us to have different religion, we need to appreciate this diversity in religion and in everything and even on Gender issues; He created us male and female with different abilities. When we begin to appreciate our Diversities then, we can have Peace, we cannot have Peace when we don’t appreciate our diversities” he said.

Our leaders need to come together with a more concerted, determined and coordinated efforts to tackle these problems”, he urged. In his final words of appreciation to the European Union (EU), he called for the extension of Agents for Citizen-Driven Transformation (ACT) Programme in Nigeria Implemented by the British Council for another Five years as the programme in is very impactful on CSOs and the General public.

Pastor Timta L Musa of the Church of the Brethren in Nigeria while reacting to issues raised at the dialogue about religious leaders contribution to the challenges stated that of a truth religious leaders need to tell their followers the truth.

“We need to check our methods of preaching to see what’s wrong, are we telling them what we are ordained to tell them or are we leading them away from the truth?

We must amplify love and Peaceful Coexistence between the various sections of the country because if there is no peace nothing can work fine in this country”.

Iman Yelwa from Sumaila Applauded the CS-CRIN for organizing the dialogue at a time the nation is faced with numerous conflicts.

He call on all religious leaders to use their sermons in Promoting peace amongst the people for a better society and nation at large.

Alh. Zubairu Ibrahim, Secretary of Miyatti Allah Association, Kano Branch who was also at the occasion expressed delight that his group and that of the farmers were both present at such an important occasion with the aim of proffering lasting solutions to the already soured relationship between the two groups.

He said, it is important for farmers to realize that farming on cattle routes is part of the major reasons why Herders on transit often destroy their farm which at the end result in crisis.

He also said, rather than resort to conflict, whoever feels he’s rights are been trampled upon should seek redress at the appropriate quarters for Peace to reign.

In the same vein, the Chairman, All Farmers Association of Nigeria, Kano Chapter, Abdullahi Aminu, in his reaction said that Government failure to provide migrating herders with routes contribute to the crisis.

He said authorities must work with the two groups and map out movement timetable for herders so that issues of destroying farm produce will be reduced if not totally stopped.